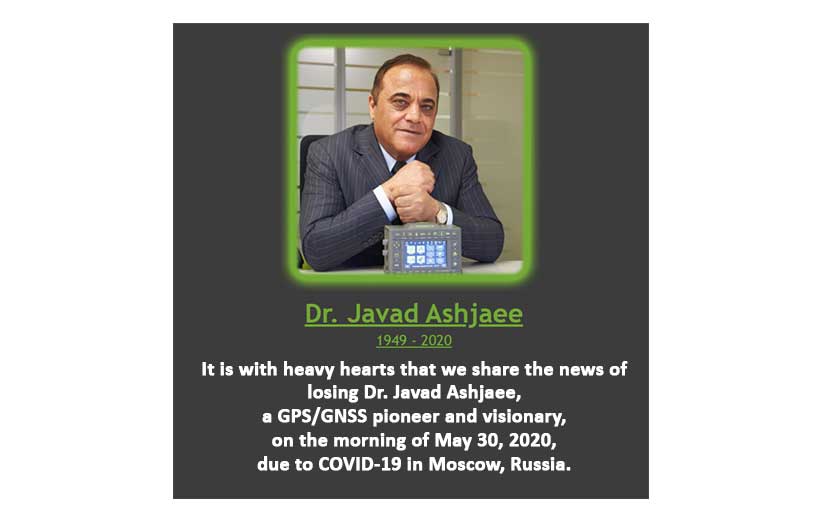 It is with heavy hearts that we share the news of the passing of our founder Javad Ashjaee, a GPS/GNSS pioneer and visionary, on the morning of May 30, 2020, due to COVID-19 in Moscow, Russia.

Over the course of 37 years, Javad made an incredible and far-reaching impact in the GNSS community. He pioneered the world’s most advanced GNSS technology through a multi-national effort that combined GPS and GLONASS and established more than a quarter century of partnership between Silicon Valley and Moscow. He was always proud of this “success story of cooperation”. Javad was a true industry disrupter long before the term and concept became popular. His whole way of doing business was challenging and disrupting to the status quo.

His hundreds of GNSS inventions and tens of thousands of products are in continuous use all over the globe, including above it! Often, his revolutionary innovations were imitated by his competitors. As Oscar Wilde wrote, “Imitation is the sincerest form of flattery that mediocrity can pay to greatness.”

At the height of the Great Recession in 2009, Javad bucked the offshore outsourcing trend and chose instead to invest in U.S. manufacturing. He declared “SILICON VALLEY IS BACK TO BUILD” and founded JAVAD EMS, which provides electronic manufacturing services where all JAVAD GNSS solutions are built as well as products from a diverse customer base which are deployed from the bottom of the ocean, to the International Space Station and beyond.

While advancing his technology and business efforts, Javad never lost his roots as a professor. He always aimed to educate and elevate everyone around him, even if it was an entire industry. His most profound skill was not in his technology: it was his ability to bring people together rather than to draw lines between them. At the end of life what matters is not what we bought but what we built, not what we got but what we shared, not our competency but our character, and not our success but our significance.

On the day of his passing, Javad’s technology played a role in the first successful crewed space vehicle launch from U.S. soil since the final Space Shuttle launch nine years ago. Javad did not wait for all of us, he launched himself to the ‘heavens’ in his own special Javad way.

To learn more about Javad’s GNSS history, written by the man himself, please click here, here.

A Washington journalist told me that some members of PNT and GPS community try to discredit my reputation instead of criticizing or responding to my technical reports. At his request, I summarize my GNSS credentials once more in here:

In 1983, I co-pioneered high precision GPS at Trimble by introducing Trimble 4000-S. It was a 4-channel geodetic receiver. I single-handedly wrote its entire software. 16 hours a day, 7 days a week for several years. It was the first commercial geodetic GPS receiver and it changed the geodetic survey industry.

Later, after I founded Ashtech; in 1989 we introduced Ashtech L-12. This was the first All-in-One, All-in-View 12-channel geodetic GPS receiver. After that, we introduced Ashtech M-12 and the legendary Ashtech Z-12. These were the first truly portable geodetic GPS receivers. We were also the first to integrate GPS and GLONASS satellites. It took all other companies more than 10 years to catch up and add GLONASS to their receivers. Ashtech still is a very successful company and after changing hands several times, was recently purchased by Trimble.

In 1998 I founded JAVAD Positioning Systems (JPS) and introduced Legacy, Odyssey, and Regency products followed by HiPer. It was a 76-channel geodetic receiver. Other companies later copied HiPer. Today many of GNSS receivers look like it. I sold JPS to Topcon, who changed its name to Topcon Positioning System (TPS) and is a very successful company.

In 2007, after my obligations to Topcon ended and according to the provisions of our agreement, I founded JAVAD GNSS and introduced TRIUMPH products. These were 216-channel receivers, integrated with several communication channels. We also introduced their ALPHA, DELTA, and SIGMA versions. We were again the first to offer European Galileo and Japanese QZSS tracking in mass production. TRIUMPH technology has been shown to have the best signal quality and best multipath reduction capabilities against all others tested by the German Aerospace. We also introduced GLONASS inter-channel (group/carrier delay) calibration to 0.2 millimeter which made GLONASS FDMA as good as GPS CDMA. JAVAD GNSS is growing fast and gaining market share.

In June 2010, we introduced the revolutionary and the only fully integrated geodetic receiver in the market, TRIUMPH-VS, with features like “Lift & Tilt”, “Interference Analyzer”, and “Visual Stakeout”. It is the most advanced high precision GNSS receiver in the market capable of tracking current and next generation signals of GPS, GLONASS, QZSS, and Galileo signals.